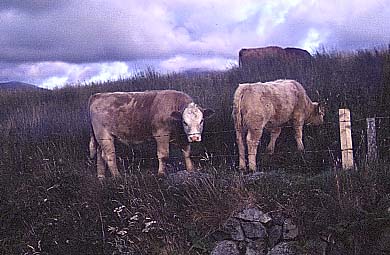 Grasslands exist in many parts of the world and are often influenced by humans. At southern latitudes, arid conditions may limit grass growth, sometimes resulting in competition among grasses for water.

Grasslands are often grazed by domestic animals or mown by farmers and this may influence the distribution and abundance of plants in the sward. However, natural herbivores, for example, mammals, birds and insects, may also feed on grasslands.

At northern latitudes, local disturbance patterns as well as larger scale land management may influence species interactions in the grasslands. In Iceland and elsewhere in northern Europe, grasslands are much influenced by livestock grazing. Grasslands are often semi-natural, for example, cultivated grasses and legumes are frequently sown into grasslands to increase their production.

Over a thousand years ago, the early settlers of Iceland burned woodlands to open new pastures. Here, the fertility of the soil is important for grass growth. Tufted Hair-grass (Deschampsia caespitosa) is the dominant on infertile land whereas Common Bent-grass (Agrostis capillaris) thrives on fertile land.

Skáðu þig á póstlistann - Sign up for the newsletter